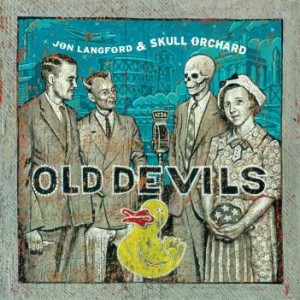 That’s right an LP!  First Langford vinyl since Thatcher was knocking around Number 10 Downing!   Edition of 1000

LP contains download card with digital version of album, plus two songs not on the CD and extra artwork

Full of soulful urgency and longing, of lost sailors, cruel pirates and creeping inevitabilities, the new solo album by Jon Langford travels o’er the seas and malls, from the pubs of Wales to the swamps of the settled life, steeped in the haunted, never-ending search for place. Old Devils sits on the tuff wharves of the world and swaps stories and worries, the lies told much better than the truths, conjuring the ghosts of mates-in-spiritual-arms from Dylan Thomas to Johnny Cash

Old Devils starts with the premise that punk rock is folk music. From there, Jon and his Skull Orchard incarnation (fellow Waco Brothers Alan Doughty and Joe Camarillo on bass and drums respectively and the Zincs/Horse’s Ha dapper, finger-picking Englishman Jim Elkington on guitar) bend, borrow and blend genres with energy, humor (grim and otherwise) and the Welsh gift of the tale. Ultimately, though, Skull Orchard rocks hard, “‘cos,” as Jon says, “that’s wot we do.”

“1234 Ever” and “Getting Used To Uselessness” go straight for the old school sweet spot–think a more muscular Hold Steady or Rockpile—the latter song masking the fed-up-with-the-quotidian-grind message with inviting opportunities to shout along and rousing handclap breakdowns. Elkington’s clean guitar lines, well-versed in the ways of the hippie folk reinventions of Richard Thompson and Bert Jansch, provide buoyant counterpoints to Jon’s chugging rhythm in “Flag of Triumph” and the woozy horns of “Haunted.” Even when the band goes all gentle country-inflected SoCal rock like “Book of Your Life” and the lush “Death Valley Day,” or charms with the pop-craft ooooohs and wicked rockabilly runs of “Self Portrait,” Skull Orchard are never far from punk’s energy or a honky tonk’s piano.

Old Devils takes us to ports of ill repute as far flung as the Old World and the West Indies (“Pieces of the Past” where “the filthy streets of Bristol were paved with blood and gold”), New Orleans and the American suburbs (“Luxury”) looking for the answers. Travel companions include soul godfather Andre Williams as the ominous rum drinking narrator, the Crescent City’s horn tribe Bonerama and the incomparable Jean Cook on violin