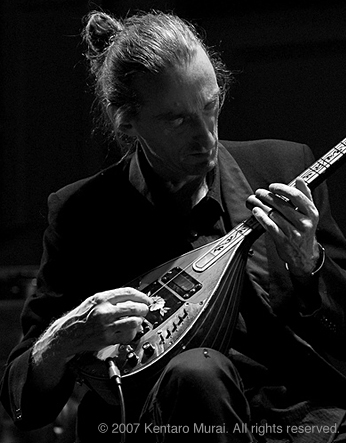 PiL will be appearing on Late Night with Jimmy Fallon on 17 May.

Alex Mar is directing a PiL documentary, which will include the 19 May 2010 performance at the Music Hall of Williamsburg.

Albert Kuvezin of Yat-Kha will release a new album, Poets and Lighthouses, which features Lu, in 2010.

PiL is touring North America in April and May 2010 and Europe in July and September.

Lu's ESP Tele was stolen in London on 17 February 2010. If you have any information about this, please contact the PiL website.

Les Triaboliques are playing at the Music Meeting Festival in the Dutch city of Nijmegen on 23 May 2010.

The Mekons have completed their latest recording, and will be touring Europe in July and August 2010.

Billy Bragg and the Acoustic Blokes played at the Roundhouse on 22 January 2010, as part of the fRoots Magazine 30th anniversary celebration.

Lu is part of John Lydon's newly re-formed PiL. They played a series of shows in the UK during the latter half of December 2009.

Lu played at European Week in Dushanbe, Tajikistan on 16 October 2009.

Patrick Ogle and Gretchen Hasse from Gearwire interviewed Lu about his saz during the Mekons' recent US tour.

Les Triaboliques, which features Lu, Ben Mandelson, and Justin Adams, appeared in Russia in July and August 2008, and debuted in London in October 2008.

Lu, Ben Mandelson, and Ian Anderson have a new trio called the Blue Blokes 3. They played a series of UK dates in June and released their first album, Stubble, on 7 July 2008.

Chicago photographer Jim Newberry has put together, Mekons: From Hideout to Mutiny, an art book commemorating the Mekons' Hideout and Mutiny gigs from 12 October 2007.

Tony Baker filmed the Mekons' 30th anniversary gig, which they performed on 16 August 2007 at the City Varieties in Leeds.

The Mekons's new CD, Natural, was released on 21 August 2007. Tony Baker filmed a promo video for the song "Cockermouth," with an intro from Patrick Eyres.

The Brackenrigg EP, a bonus EP from the Natural sessions, was released on Rhapsody on 25 September 2007.

The Mekons are on the cover of the October 2007 issue of fRoots.

Recently, Lu has been continuing his research on the music of Central Asia.
Lu Edmonds

PROFILE
Robert ("Lu") Edmonds is a musician, composer, and producer based in London. Since his start in the 1970s as a guitarist for the punk band the Damned, he has been maintaining an active presence as a well-respected artist in a variety of genres. In recent years, he has been best known for his contributions to world music.
Background and Musicianship
Lu was born in Welwyn Garden City, Hertfordshire. He acquired the name "Lu" after successfully auditioning for the Damned. After having made his name as a guitarist in the punk and New Wave scenes, he expanded his oeuvre to include other musical instruments and genres (including folk, roots, world music, jazz, and avant). He has been known to play the guitar, bass, piano/keyboards, bass-pulur, bozok, bouzouk, saz, cümbüş (and its variants: tarbush, tenorbush), ud, darbuka, mazhar, Norwegian flute, tüngür, drums, melodica, and bagpipes. He has also learned throat singing. Having taken up the bouzouk and saz (including the electric saz he now uses) in the 1980s, he now also builds his own cümbüşes.

In recent years, Lu has been an active member of a number of bands, including Billy Bragg & the Blokes, the Mekons, the Blue Blokes 3, Les Triaboliques, and PiL. He is also a member of Shriekback, and frequently collaborates with jazz soprano saxophonist Lol Coxhill. He has been recording and performing squeaky-bonky acoustic "anti-music" in Raz3, a trio with K-Space's Ken Hyder and Tim Hodgkinson. He and Mark Roberts have also performed with Babar Luck (from King Prawn).

Songwriting
Over the years, Lu has accrued a number of songwriting credits. He has co-written songs with Kirsty MacColl, Carl Marsh, and members of PiL, Billy Bragg & the Blokes, the Edge, and the Spizzles. He has also written music for advertising. More recently, he has written an album's worth of original songs.
Production Credits
Lu has had an active role in producing many of the albums on which he has played. He has produced albums by artists such as Yat-Kha and Babar Luck. He recently mixed Natural, the Mekons' latest release.
Contributions to World Music
At this time, Lu is probably best known for his work in world music. In addition to having recorded and performed with world music acts, he has tour managed a number of world music bands, including Alaap, ¡Cubanismo!, the Klezmatics, and the Afro-Cuban All Stars. His involvement in Cuban music led to his writing the liner notes to the 1998 compilation album Pinareño: From the Tobacco Road of Cuba on Alula Records. He also managed the Tuvan band Yat-Kha in the 1990s, and is acknowledged on Susheela Raman's 2003 album Love Trap.

Lu is also known for his contributions to the world music community. He was responsible for setting up the precursor to WOMEX, arguably the largest annual international music conference and trade fair. He participates in a number of world music-related conferences and festivals, often as a speaker or a member of the jury. He was also part of the 2005 and 2007 Sayan Ring Festival's jury in Siberia. On 25 July 2009, Lu, Tarhana, Labess, and Pacifika led the Global Mashup workshop at the Calgary Folk Music Festival.

One of Lu's current focuses is Central Asia. Following research trips to Tajikistan, Kyrgyzstan, and Kashgar, he has been giving talks on the state of the region's music industry. He has also worked with Restorers without Borders to initiate the Tusovki project in 2006 to manage, promote, and develop a venue for musicians in the Gurminj Museum in Dushanbe.

Digital Culture
Lu maintains active involvement in the digital community, particularly with regard to the expansion of music into the digital realm. He was involved in the Ellipsis PORT: Navigating Digital Culture project in 1997, and the MPEG-7 project CUIDADO. Having worked with CEO Dagfinn Bach since 1993, he is one of the founders of Artspages, having written the User Requirements for Artspages 1.0 in 1999, and more recently being responsible for Eastern Europe, Russia, and Middle East coordination and artist contacts. Lu also participates in conferences for music and technology, including Résonances, MIR, and the Future of Music Coalition. He is also the webmaster for Yat-Kha's site.
Trivia
Writings
In 1997, he wrote three articles for fRoots magazine.
Conferences and Seminars
Interviews
Radio Appearances